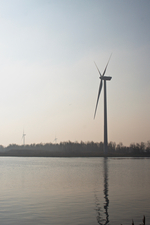 Since Greenhost was founded we have made as many "green" choices as possible. We started by working together with EvoSwitch, continued by buying second hand furniture and developed a shared hosting environment that is extra energy efficient. But at Greenhost we do not only want to be greener than the other companies. We want to be as sustainable a company as we can be!

That is why we have created a permanent team of employees that will dedicate themselves to keep the "Green" in "Greenhost. We have identified the following as important next steps:

We believe that public reporting is a good first step. On one hand it will force us to look into our usage every year and keep us on our toes. On the other hand it will enable you, our partners and clients, to notify us if you see something odd. To reach our sustainability team you can send an e-mail to sustainability@greenhost.net.

One of these notifications came a while ago from a blog post about sustainable web hosting, zaailingen did some digging into the sustainability of different data centres. They found out that EvoSwitch, one of the data centres whose services we use, was offering something they called "sjoemelstroom" (deceptive electricity, the Dutch term relates to Volkswagen's dieselgate: sjoemeldiesels).

Recently, Zondag met Lubach, a Dutch television program, made a special explaining some of the problems in the electricity market. If you are not up for reading detailed explanations, you can watch their satirical summary with English subtitles on YouTube.

First of all because internationally, the grids of countries are mostly not interconnected.

Secondly, because "transporting" electricity incurs losses. It would not be economical to transport it that far over a cable.

Thirdly, the grid is not like the internet, it's not a switched network. It is impossible to send electricity from a specific source to a specific target.

For these reasons there are "GOs", short for "Guarantees of Origin", and there is an international market of GOs. GOs describe an amount of energy and the conditions under which it was generated. GOs identify the "sustainable" in "sustainable energy". The idea is that the electricity GOs describe can only be consumed once, so if you as a supplier generate 1 GWh (Gigawatt hour) of energy, you can sell the electricity. And apart from that you can sell the right to call 1 GWh of energy "green" on the GO market. There are a couple of important aspects to realise about this:

Unfortunately we have to conclude that GOs increase the cost of sustainable energy. GOs can't make fossil based power plants less profitable because it imposes no cost on fossil fuel sources. This means this system will not help us end fossil fuel based electricity.

So how can we get legitimate sustainable energy?

We have a few general pointers on getting legitimate sustainable energy.

It is also worth noting that consumers are becoming more and more aware of the importance of sustainably produced electricity. An emerging trend we have observed is that some companies branch off their fossil fuel based production to a new company name. They make it appear they have become 100% sustainable but continue to sell their fossil fuel based energy to businesses and governments that often prioritise cost efficiency over sustainability. WISE gives those producers a lower score.

The majority of our electricity is consumed in the data centre (EvoSwitch) and in our office.

After inquiry from Zaailingen, we found out that at that point in time, EvoSwitch's energy mix was 5% wind energy and 95% hydroelectric energy, so that was most probably 95% "sjoemelstroom".

Since then, together with EvoSwitch, we have been looking for a solution to this problem. Now we are happy to say that we found one! We have arranged that from the start of this year all our electricity comes from Dutch wind energy. Starting from 2019, EvoSwitch will only invest in European wind energy, but they will keep buying Dutch GOs for our energy usage.

Edit: To clarify the above: EvoSwitch purchased a certificate for Dutch wind-energy, to compensate for our usage for the years 2018 and 2019. In 2020 they will switch to European wind-energy for the entire datacenter. There has also been a new development, the EvoSwitch owned datacentre we are located in has been acquired by IronMountain. We are asured this will not change these plans. We will keep monitoring the situation and take action if that seems necessary.

So what about the electricity we have used in the last two years? Our servers and infrastructure in the data centre have used a total of 144 MWh of electricity in 2016 and 2017. To make up for the "sjoemelstroom" used, we have bought 144 MWh of Dutch wind GOs.

As you might have seen in a recent blog post, we have moved to a new office. There are solar panels on the rooftop of the building and we have an energy contract with Pure Energie. Pure energie only invests in Dutch wind and solar energy and is rated 10/10 by Wise Nederland.

Electric energy is of course not the only thing that makes us sustainable. We are constantly investigating new ways in which we can become more sustainable. These are the things we have done recently:

We have based a lot of the information in this post on these sources.